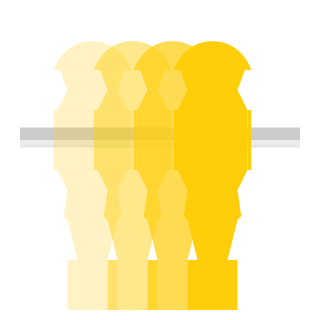 Please Select a Training Tutorial Below

The Stick Pass is one of the most widely used passes in Table-Soccer second to the Brush pass. It is a versatile and aggressive pass. Whether you choose the Stick pass or some other passing option, it is imperative that you understand all the options of any given passing style, how to use the pass in a real game or match, the pros and cons of each pass, and whether it fits your game style. The different lessons are designed to test your currrent skill level, help you react to different holes as they open, develop speed, precision, and consistency. What you are ultimately doing is building your physical and mental skills hand in hand. You can work on the exercises in any order you choose.

Stick Lane Example
By Nobody
Become the Best at Examples, you can Do it!
Stick Lane Pass
Ryan Knapton
Part of the Next Level Foosball training tutorials

Stationary Stick Pass Pro Tip
By Denis Ory
Many people are not sure how to use the Stick series to gain an extra advantage. They think that the series is just 50-50, and it is all about having a super fast lane and wall. It is exactly that mindset which scares many people away from the pass. There is a subtle trick to the pass that I am almost reluctant to give away. Bringing the pass to the next level requires more than just speed. It requires a little thing called deception similar to what brush passers do when they throw fakes. With the Stick Pass, you use something against the defender and it is called MICRO MOVEMENTS. That's Right! By ever so gently tweaking and moving the ball with your man, you can have the defense jumping like a jack rabbit. They never can tell when you are about to take off, and adding a few micro man flicks as well can add to the deception. The key is to mix in these micro movements carefully into your game plan, so the defense never can really tell when you will execute your pass. This reduces the chance that they can or will race you. These micro movements are more deadly than a fake on a brush pass, because the pass can be excuted so quickly and you can also throw as many as you want at any time. This is just one of the little nuances of the stick pass when done correctly. Don't tell ya friends the Secrets! :)
10 Ways To The Wall
Ryan Knapton
Part of the Next Level Foosball training tutorials